Big News: Thousands of Teachers Saved by Arbitrator From Falling into ATR Cesspool

The prospect of thousands of teachers falling into the ATR cesspool has been averted, at least temporarily, by an independent arbitrator.  The arbitrator ruled that the Mayor's plan to "turnaround" 24 schools is a violation of the Collective Bargaining Agreement.

An arbitrator has ruled that the city’s plans to reform 24 struggling schools by overhauling their staffs violated its collective bargaining agreements with the teachers and principals unions.

The arbitrator’s decision adds a new and abrupt twist to the six-month-long shakeup at the schools. It also virtually guarantees that the city cannot claim more than $40 million in federal funds for the schools that the overhaul process, known as “turnaround,” was aimed at securing.

The turnaround rules require the schools to replace half of their teachers, and the city was trying to use a clause in its contract with the teachers union, known as 18-D, to make that happen. In recent weeks, “18-D committees” told hundreds and probably thousands of teachers and staff members at the schools they could not return next year.

Under the arbitrator’s ruling, all of those staff members are now free to take their jobs back.

Click here for the complete article.
Posted by NYC ATR at 4:49 PM 2 comments:

Marc Epstein, the Ronin Teacher, is once again a wandering warrior. After being plucked off the ATR rolls for a position at Jamaica H.S., Mr. Epstein has recently learned that he will be excessed once again.  The reason?  Because Jamaica H.S., like almost all of the city's once-great large comprehensive high schools, is being broken up into several mini-schools--schools that will be staffed, of course, by young, cheap, inexperienced teachers. No room for expert veterans like Mr. Epstein.

In the meantime, Mr. Epstein scours the Open Market for positions, and contributes insightful articles to publications like the Huffington Post.  Here is his latest:

It would appear that when students don't attend school, they don't get educated in ways that are productive for them in particular, and society at large.

Teachers have long known this to be the case. Now the issue is being joined by politicians, fueled by a Johns Hopkins study that found that 15% of American school children have been labeled chronically absent for missing one school day in ten. In New York City the number is 20%.

With only a few weeks remaining in the current school year, New York City has launched a multi-million dollar advertising campaign that asks, "It's 9:00 AM Do You Know Where Your Kids Are?"

Prior attempts at reducing truancy have included celebrity messages and "robo" calls made to the homes of the chronically absent by famous rappers to encourage attendance. Parental responsibility remains a touchy issue. While Bloomberg pointed his finger at parents, he maintained that it's up to the schools to ensure that their students are in attendance.

The problem isn't unique to New York City. Buffalo's teachers refused to have students who were chronically absent factored into their evaluations. The state refused to release Race To The Top monies until an agreement was reached. But there were no solutions that offered any real hope of reversing the staggering number of truants, save the tired nostrums of increased counseling and more parent outreach.

At the end of the day, neither public service messages, nor increased cooperation between schools, police, and social welfare services will cut the truancy Gordian Knot.

The Waiting Game, in which the Former ATR Wonders About September 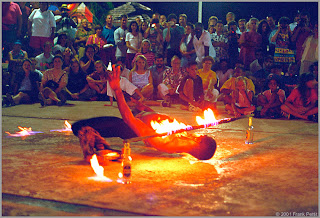 After a long absence, our star contributor, Life in Limbo, is back.   She has spent the year out of the ATR frying pan, but into the fire of an out-of-control school.  Her life, we're sorry to say, is still in limbo.
So it’s June. And so far, it appears that I will be spending my first summer in three years NOT wondering where I will end up in September. I should be happy. I should be relieved. I should be relaxed, but this is not the case.


The school to which I am appointed is out of control. There is a complete and total lack of discipline which, of late, has become downright dangerous. Forget the constant cell phone/iPod visibility and usage (one student even brings his laptop to school every day and plays games on it constantly. When told to put it away, he responds, “Touch my f***ing laptop and you won’t have no arm no more, B****.”) When told to put the laptop away by a dean or AP, he does. At least until the dean/AP leaves the room. Then the laptop is back out and he resumes his games. Administration refuses to confiscate any of the electronics. Most of the time they are nowhere to be found.

Fights in the hallways and classrooms happen several times a day. Students smoke pot in the stairwells and often come to school drunk at 8:00 in the morning after drinking in a local park before school. Line-of-duty injuries are common due to unruly students physically assaulting me. I have sustained more than one this year. Both incidents were deemed “accidents” and the consequences to the students were minimal. The teacher next door is out on a line-of-duty injury resulting in a dislocated shoulder as a result of a student slamming a door shut on him (another “accident”). Another teacher has been out for some time with a neck, back, and knee injury when two students running in the halls plowed into her and threw her to the floor. The hallways double as jogging tracks and we teachers are constantly jostled and bumped as we stand in the halls during passing. Hall roamers run into the classroom several times a day to harass other students, randomly shout obscenities at the teacher, perform hip-hop dances, hide from administration, or fight students in the classroom.

Administration’s response to this has been anemic at best– student removal forms are never acted upon, incident reports are filled out and submitted, but fail to elicit even an “in-house” suspension. Students who fight are removed from the room, but are returned to class ten minutes later after being told that they “are making poor choices.” Students who curse at and threaten teachers are taken out of class for a few minutes and returned to class because “there is nowhere to put them and they need to be educated”.


I am fully appointed to this school, which means unless I am excessed, I will return here in September. Rumor has it that the administration is to be replaced, and while I have no concrete news on this, I think something is up, as we have a Quality Review coming up and the administration is noticeably quiet. A week before a QR would have them poking into classroom libraries, data binders, file cabinets, and scouring Post-it notes on bulletin boards for “actionable feedback.”  But nothing. It is as if they have thrown up their hands and left it all to fate.


I wonder about this. For all their faults, the administration in this building is not a “Gotcha Squad.” I don’t tremble with fear when they walk into the classroom and I have had extremely positive observations and interactions with them. However, the fact that I did press for suspensions for the students involved in my line-of-duty injuries may have caused them to lose face in the safety arena and I know they try hard to keep everything quiet. Since I am currently teaching out of license (sort of), I can easily be excessed if I become a “problem” and replaced with a newbie teacher in the appropriate license for the position. So I may very well be back in the ATR pool in September.

So as the end of the year approaches, I find that the ATR pool may not be as bad as returning to this dangerous school, especially if the administration IS replaced and we end up with reptiles from the Leadersh** Academy.

Either way, I lose.